Making sense of training terminology – negative, positive, what does it even mean?

Making sense of training terminology – negative, positive, what does it even mean?

When talking about training and behavior; misunderstandings easily happen. When translated into real life and actual training, misunderstood information can not only result in us not getting the results we want from our hard work, but in some cases it might even lead to not so pleasant experiences for the animals that we are training.
One way of preventing these misunderstandings and understanding each other better is to speak the same language: in our case, that means using correct training terminology.

Arja, a young Blue and Gold Macaw, given a treat during a training session. This reinforced the behavior we wanted to see more of, and led to hear doing it more often. In this case, staying on her perch!

The four quadrants of operant conditioning might sound a bit like sometyhing super sciency, but are actually super simple, and they’re all important to know about. These words describe the consequence of a behavior (what happens right after the animal has done something) and what effect that will have on the animals behavior in the future. That’s it!
Positive reinforcement is one of these quadrants, and describes a consequence that will increase the frequency of a behavior. You’ve probably heard that phrase before. (And of not, you have now!)
I.e  Parrot steps up -> Parrot gets his favorite treat! The result will be that your parrot steps up more often when your hand is presented in the future. This is also why we can train parrots to do things like wave their foot or say something on cue. (Train them, plain and simple!) Pretty straight forward.

The one thing that tends to confuse people the most here, is the use of the words “Positive” and “Negative”. In this context, these words have nothing to do with “good and bad”. Instead, they are used to describe if something is added or removed. Nothing more, nothing less! In the example above, the consequence was that a treat was added; hence it being called positive reinforcement.
Positive -> something is added after the behavior
Negative -> something is removed after the behavior

These lorikeets where trained to station on a rope together using positive reinforcement: they received nectar in a syringe for offering the behavior I was looking for. Shortly, this was the result each morning!

We already have an example of what positive reinforcement can look like, so let’s take a look at the other three!
An example of Positive punishment could be squirting a bird with a water bottle. You add an aversive (something unpleasant) to make something happen less often.
Negative reinforcement could be getting a bird in to his cage by chasing him with a towel or net. When the bird enters the cage, the unpleasant experience of being chased stops and the towel or net is removed, which results in the bird entering the cage quicker the next time you start to chase him.
An example of negative punishment would be removing yourself from a parrot that is playing a bit too rough for your liking. By removing something the parrot likes (your attention) you are reducing the frequency of an unwanted behavior, i. e adding too much pressure with his beak when you are playing.

One thing to remember is that you are not the one deciding whether a consequence is a punisher/reinforcer or not: the bird is! Shouting “shut up” to a screaming parrot might be intended as punishment, but is suuuper reinforcing to many parrots and will often result in them screaming more, despite our attentions. Similarly, a sunflower seed may be offered as a reinforcer, but if the parrot doesn’t like sunflower seed, you won’t see any increase in behavior, and the seeds are not reinforcing. And if a parrot is being to rough with is beak and the behavior isn’t reduced by you leaving, that means that it hasn’t been negatively punished, and you need to find another strategy. Something can be reinforcing for one bird, like touch, but very punishing for another bird, or even the same bird in a different situation. It all depends on what the effects on the behavior is, so we can never say that a certain object -is- a certain consequence, it depends!

Please also note that the quadrants were not created equal. Positive punishment and negative reinforcement might work sometimes, but often come with many unwanted side-effects that can be detrimental both to the birds mental health as well as our relationship with our animals. Instead of chasing the bird for it to go back to it’s cage for example, a better strategy would be to teach him to go inside using positive reinforcement: like with the duck in the picture above.

Hope this helps to clarify some things. 🙂
Happy training!

Want to learn more about how to use positive reinforcement to train your parrot and teach it acceptable every day behavior? 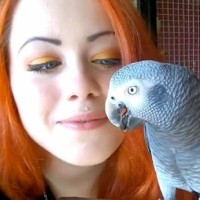 I have just got a Avery male alexandrine he seems friendly enough, is like to teach him not to be scared and to step up like my hand reared girl with out biting as he bit my husband the other day but my husband not affariad to get in and handle him show who’s boss at the moment I’m just touching his beak and showing him my girl likes it also a touch of his tail I’ve tried giving him good treats by showing him my girl will take from my hand but he’s not keen.

Any other ideas you could offer

Stephanie,
I’ve been reading your articles and am so impressed with your insight and ability to work with these majestic creatures! I have an adopted Harlequin Macaw, Willy, and an adopted Senegal, Jyndi (they will both be 18 this year). I’ve had Willy for three years now. His screaming has become quite an issue this past year. If I leave the room – as a negative punishment when he’s shouting – how long should I wait to return?? I can return with a treat when he’s quiet but he usually starts screaming again. I’m going sign up for your newsletter… I could use some help!! Thank you!!